By Zheng Zhiping | Updated : Nov 20, 2022
On the evening of November 19, the first Hunan Tourism Development Conference as well as the Cultural Tourism Promotion Conference kicked off in Zhangjiajie. The lively atmosphere of the opening ceremony as well as the sense of technology, ethnic and international styles and profound connotation of the programs deeply impressed the audience online and offline. 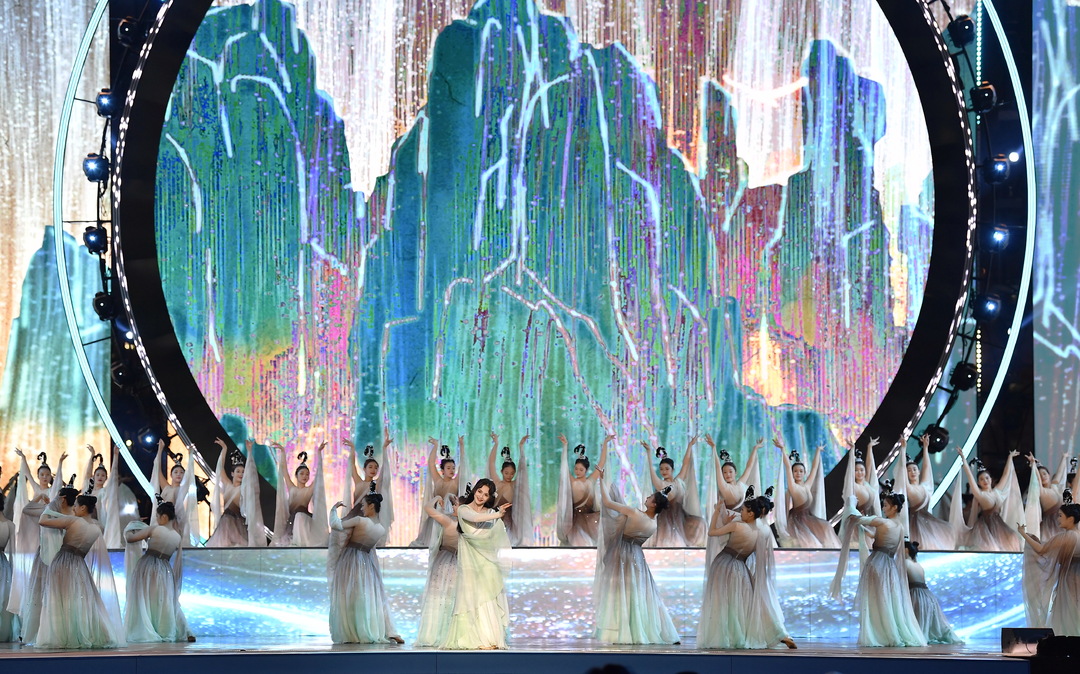 Sense of technology
Walking into the site of the opening ceremony of the first Hunan Tourism Development Conference, people were amazed by the stage.
The towering peaks in Zhangjiajie were displayed on more than 20 vertical long screens and one round screen. The long screens looked like a forest of peaks sticking into the sky, and the round screen resembled a pool of lucid water. The gap between the long screens created a sense of mystery. On the peaks, the waterfall fell and the white cranes flew. This is the fairyland Zhangjiajie! 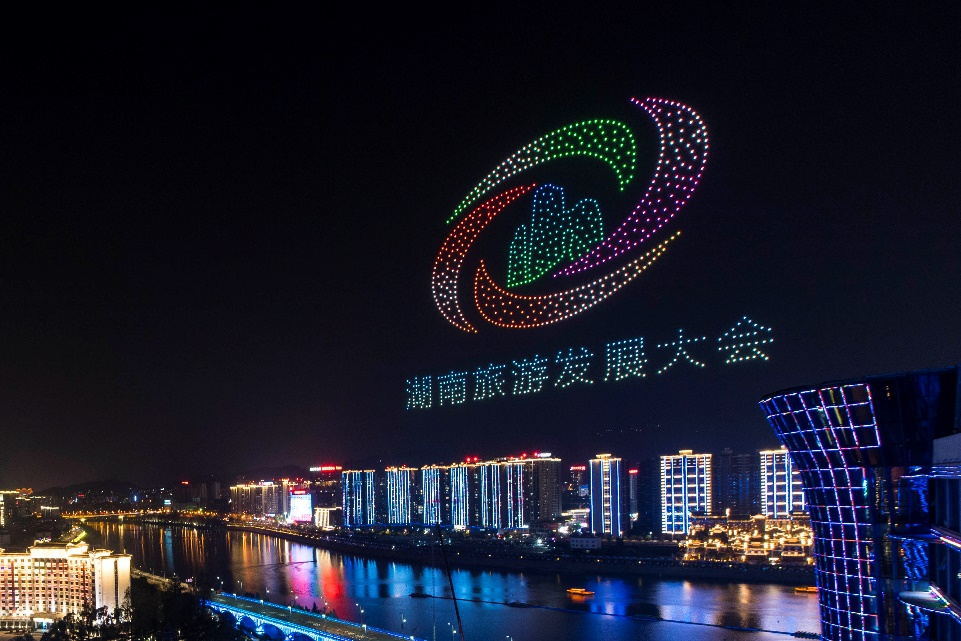 Before the opening ceremony, the performances presented by drones provided the audience with an impressive visual feast. 1,000 drones constantly changed their shapes in the night sky, showing the picturesque natural scenery and cultural landscape of Zhangjiajie with the help of technology. The Lishui River appeared in the sky, and even the cruise boat was alive. Tianmen Cave shined in the sky, seeming that it really became a gate leading to the fairyland. The Tujia stilted buildings were turned into a magnificent palace in the sky where immortals live.
After the opening ceremony, the audience enjoyed a spectacular firework display customized by the fireworks team of the Beijing Winter Olympics. The gorgeous fireworks lit up the night sky over Zhangjiajie, marking a successful end to the opening ceremony.
Ethnic and international styles
The programs were full of ethnic cultural elements. In the drum show to welcome the guests, the performer wore ethnic costumes to present a wonderful Miao drum show, which ignited the passion of the audience. With the exciting drum beat, various Miao embroidery patterns and Miao silver ornaments were displayed on the big screen, catching the eyes of the audience.

The flower-drum opera “The Story of a Woodcutter and His Fox Wife” was adapted into a musical instrument show and performed at the opening ceremony.

The adapted music was played by traditional instruments such as zither, pipa and flute, which was more enthusiastic, unrestrained and fashionable.
In the Tianmen Cave sub-venue, 999 stairs of Tianmen Mountain were lit up in the dark. A group of models dressing in well-designed ethnic costumes put on a fashion show, turning the stairs into the most unique runway in the world. The designers integrated ethnic culture and fashion elements to show such national intangible cultural heritage items as the Tujia brocade, the Miao embroidery and silver ornaments of ethnic minorities in a new way. 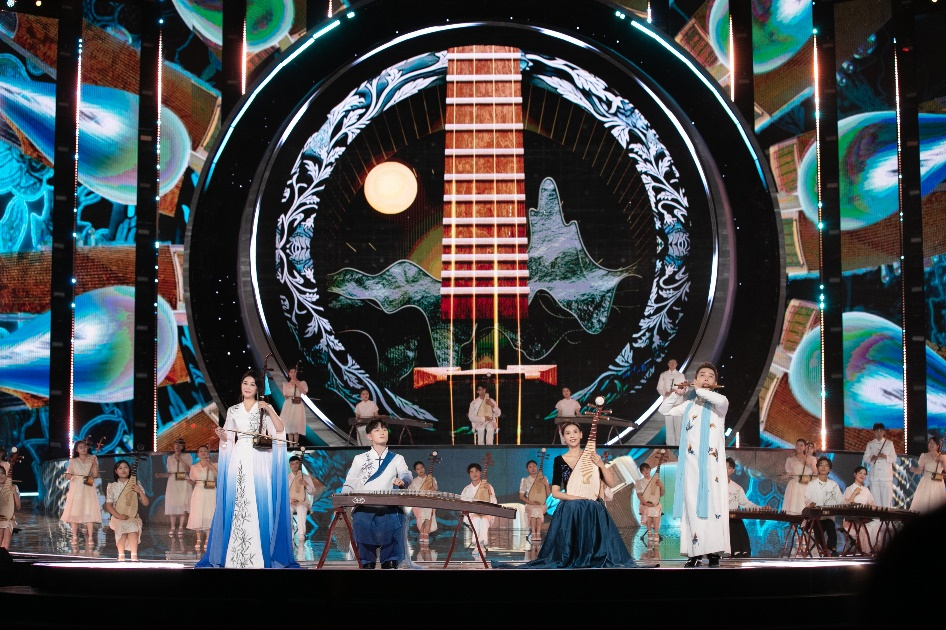 Love for family and country 100 representatives composing of tour guides, policemen, cleaners, drivers and journalists stood on the stage and sang the “Life in Full bloom” with the singer Sun Nan. The lyrics of this song vividly depict the life of thousands of ordinary people who have been working hard at their posts.
Against a background of the pandemic, it is the perseverance and hard work of people in all walks of life in Zhangjiajie that has made Zhangjiajie take on such a new look that numerous tourists have been attracted. 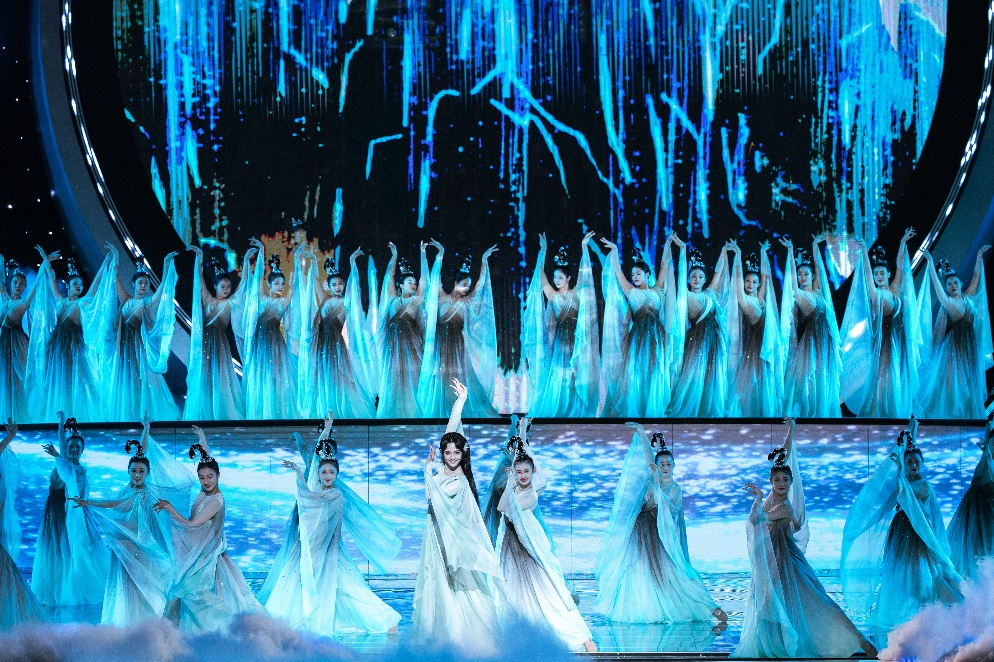 When the singer Yin Xiumei sang the exciting song “My Motherland and Me”, the whole audience sang in unison. This song is of special significance for the people from Zhangjiajie people. In Dayong Ancient Town just by the Lishui River, the lyrics were carved on the big rocks. In 1984, a lyricist who stayed at Tianmen Mountain Guest House was inspired by the beautiful scenery and wrote the lyrics in 20 minutes. 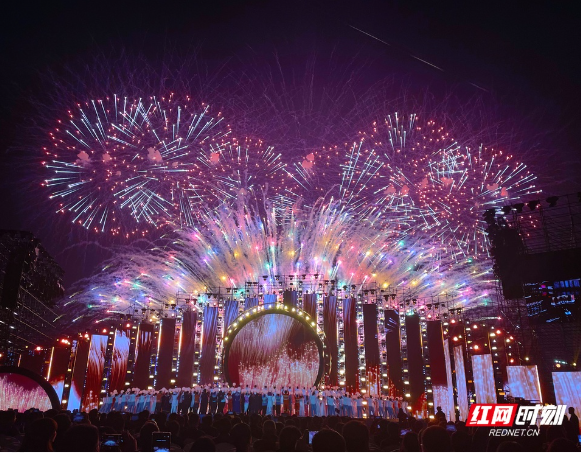 At the end of the opening ceremony, the brilliant fireworks lit up the night sky again, and people were reluctant to leave. This night will be deeply engraved on the mind of Hunan people and countless audience.